The Phenomenology group at the IIHE pursues research in particle phenomenology focused on Beyond the Standard Model (BSM) physics. The objective is to address unsolved questions in the current formulation of the Standard Model of particle physics, which describes the elementary particles and their interactions as a quantum field theory. The topics of investigation includes the unification of the forces with gravity, the origin of the hierarchy between the electroweak scale and the Planck scale, and the nature of the Dark Matter. Here below

The group includes one faculty member (Prof. A. Mariotti), two postdocs (A. Ahmed and S. Najjari) and a PhD students (M.Vereecken). The group is supported by the HEPatVUB strategic program of the VUB and by the EOS - be.h.

The origin of the electroweak scale and its stability under quantum corrections remain open issues of the Standard Model of particle physics, under the name of the hierarchy problem. In order to explain the naturalness of the electroweak scale and of the Brout Englert Higgs boson mass, several BSM theories have been proposed in the last years, including supersymmetric models as well as more uncoventional scenarios (Twin Higgs, relaxion, clockwork). The Pheno group study theoretical aspects of BSM theories with the aim of finding new path to explain naturalness, as well as to find novel signatures to be discovered in current high energy physics experiments.

As an example, here we report the conclusive plot of a recent study about the R-axion, a pseudo-nambu goldstone boson that has been predicted to be a generic but unexpected sign of supersymmetry (and its breaking) in a recent PRL publication of a member of the group (A. Mariotti) in collaboration with researchers from Paris, CERN and Tel Aviv University ( Brando Bellazzini (IPhT, Saclay & Padua U.), Alberto Mariotti (Brussels U., IIHE & Intl. Solvay Inst., Brussels), Diego Redigolo (Tel Aviv U. & Weizmann Inst.), Filippo Sala (Paris, LPTHE), Javi Serra (CERN), "R-axion at colliders" Phys.Rev.Lett.119 - 2017 ).

Despite indirect evidences for the existence of dark matter in our Universe, its nature and properties are still a mystery. The Pheno group investigates novel directions in dark matter model building, including theoretical formulations embedded within BSM theories, as well as the possible imprints in detection experiments, ranging from direct/indirect detection to colliders. 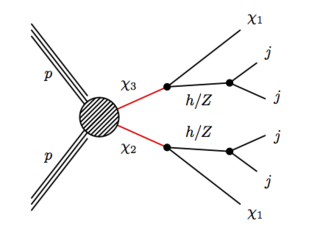 In a recent study, in a collaboration with members of the ULB group (Prof. L. Lopez-Honorez), the VUB-CMS group (Prof. Steven Lowette) and the Institute for Theoretical Physics in Beijing (Lorenzo Calibbi) a novel model of dark matter with exotic signatures at collider was studied.

The model can explain the dark matter abundance in the Universe through a mechanism named freeze-in, and can also leave imprints in the structure formation that can be detected in Lyman-alpha forest data. At the same time, its smoking gun signature consists in the prediction of new particles with a macroscopically long lifetime to be discovered at the LHC through their decays into dark matter. Here below a schematic representation of the process producing pair of long-lived particles in proton proton collisions, decaying to dark matter ($\chi_1$) and jets.