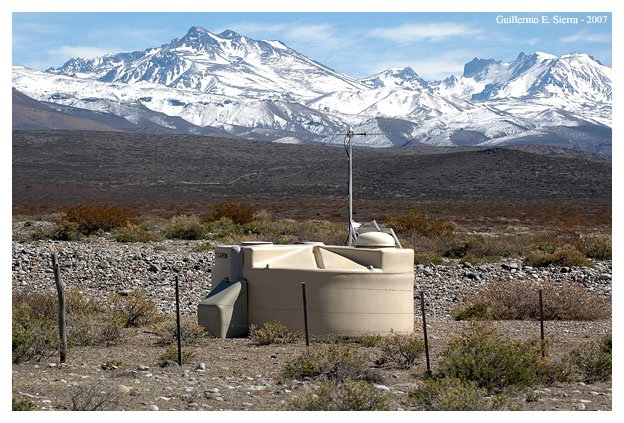 Pierre Auger Observatory is the largest cosmic rays experiment ever built, located on the "Pampa Amarilla", in Mendoza Province, Argentina. It is designed to unveil the origin of ultra high energy cosmic rays, particles that can reach energies above $10^{20}$ eV (center-of-mass energy > 100 TeV)

The detection area covers 3,000 km$^2$; almost 30 times the size of Brussels. More than 500 physicists from nearly 100 institutions around the World are collaborating  to analyse  the data and to operate the detector.

It is a "hybrid detector," employing two independent methods to see cosmic rays. One technique is Cherenkov radiation detector(called "Surface Detector or SD"), an array of 1,660 water tanks filled with 3,000-gallon(12,000 liter) of purified water, deployed on the ground as separated from each other by 1.5 kilometers. The other technique tracks the development of air showers up to a few kilometers above the ground, by observing emitted ultraviolet light using telescopes(called " Fluorescence Detector or FD"). 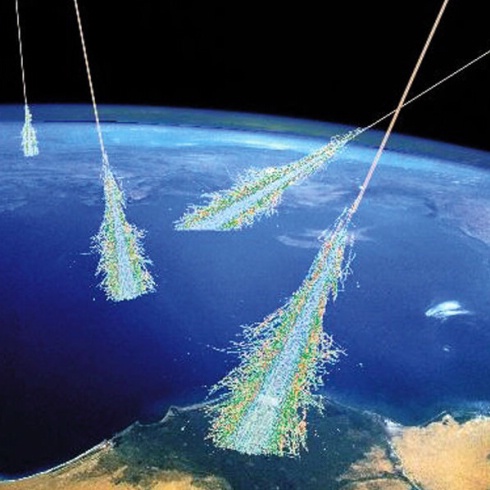 Cosmic rays are fast-moving subatomic particles that are constantly bombarded the earth from all directions. They travel at nearly the speed of light, which means they have very high energy. Cosmic Rays span enormous range or energy, from about 10$^7$ eV to 10$^{20}$ eV. The highest-energy cosmic rays have a hundred million times higher energy than the particles produced in the world's most powerful particle accelerator, the LHC(large hadron collider). Most of the cosmic ray particles are either nuclei of atoms or electrons. Of the nuclei, the most common are protons but all naturally occurring elements have been detected.

In Earth's atmosphere such particles interact with air molecules and create violent collisions. Fragments fly out from this collision and collide with more air molecules in a cascade, which continues until the energy of the original particle is spread among millions of various particles, raining down upon the earth. This cascade of particles is called "air shower" and its properties such as flux, energy, arrival direction and particle composition can be measured and used to understand the nature of the primary cosmic rays. While we know quite a lot about regular cosmic rays, the origins of the ultra-high energy(10$^{18}$ eV to 10$^{20}$) cosmic rays(UHECR) remain as an open question. They have enormous energies and thus must originate in remarkably energetic astrophysical sources. Auger data indicates that the most powerful cosmic rays come from outside the Milky Way.

The mass composition of ultra-high energy cosmic rays is a very important observable to understand their sources. The atmospheric depth at which the shower reaches its maximum size(Xmax), which FD is sensitive to, is one of the most robust variables to infer the mass composition of primary particles. Furthermore, the electromagnetic components(electrons, photons) to muonic components(muons) ratio which can be calculated by the number of muons observed by SD is also a good and independent variable to be used. Using these variables, Auger data analysis suggests that UHECRs are not simply made of protons, but also heavier nuclei.

Pierre Auger collaboration is currently installing an upgrade of the surface detector, AugerPrime. The goal of  AugerPrime  is to enhance the sensitivity to mass composition for the surface detector. Each of the SD station is equipped with  plastic-scintillators  of area 4 m$^2$ which will allow teh reconstruction of different components of the air-showers. The deployment of the upgrade has started in 2018.